Thanks for Signing Up

Hanging out in Downtown Memphis? You can't miss The Rendezvous – or maybe you can? This iconic spot is tucked away in the alley across the street from The Peabody Hotel, making it one of the best worst kept secrets of the city. As the some of the OGs of barbecue, the Vergos family has put their spin on Memphis’ barbecue for over 70 years.

Cozy Corner is a well-established element of the Memphis barbecue tradition, things are nevertheless done a bit differently here. A Chicagoan, aquarium-style barbecue pit in the front of the restaurant greets customers. Sliced instead of chopped pork dresses the sandwiches and plates. Smoked turkey and barbecued cornish hens are specialties.

The BarBQ Shop is known for their BBQ spaghetti. Yes, it is a thing and yes it is delicious. It is exactly as it sounds -- marinara and pulled pork over traditional spaghetti noodles. It is served at a few restaurants around town, but most notable here. It may sound strange, but locals and curious visitors all rave about it, so it is worth checking out.

Want a taste of tradition? Head to Payne's. This Midtown spot has cooked up some of Memphis' best barbecue since 1972 and takes "Mom and Pop" to the max. Most of the menu hasn't changed since the beginning, so you’re sure to dig into some classic Memphis flavor. Grab the barbecue sandwich with their special slaw. Trust us – it's life changing.

A&R BBQ is where many Memphians eat their daily barbecue. Traditional pulled or chopped pork sandwiches and famous fried pies: apple, peach, sweet potato. Show up early, or call ahead, the pies run out fast, locals would encourage tasting of one of each.

Neely’s is another Memphis staple! Many Memphians stop by daily for a barbecue delicious lunch or dinner. Their hot menu options are chicken, beef, BBQ nachos, and the BBQ spaghetti! So delicious.

One & Only offers high quality Memphis style BBQ, Ribs, Smoked Turkey and Smoked Wings. They season and smoke their meat for 15 hours and have plenty of meat to choose from on their menu. I also highly recommend their twice baked potato salad.

Heading to East Memphis? With more than 30 years under their belt (and a few pounds on ours), this Memphis staple serves some serious barbecue and southern favorites. Here's a pro-tip: some locations have drive-thrus making it the perfect pit stop!

Jerry Lawler's Memphis BBQ Company believes that great barbecue should have the same characteristics as a wrestler, bold, in your face, and not afraid to give even the biggest fella a punch in the mouth. When it comes to their barbecue its said to be authentically Memphis and delicious.

The Commissary BBQ has became a staple of Memphis cuisine! Their BBQ is slow cooked and the food is home made. Many Memphians rave over there "Pig Chips", which are House made potato chips with special bbq seasoning.

The World’s Best Barbecue Is In Memphis

Welcome to the World Famous Memphis Barbecue Trail! Memphians know barbecue, why else would the International BBQ Fest be held here? Pit prepared, rubbed in spice, and smoked to perfection just the way we have for decades. Follow the path for the best Barbecue in the world!

What is Memphis BBQ? 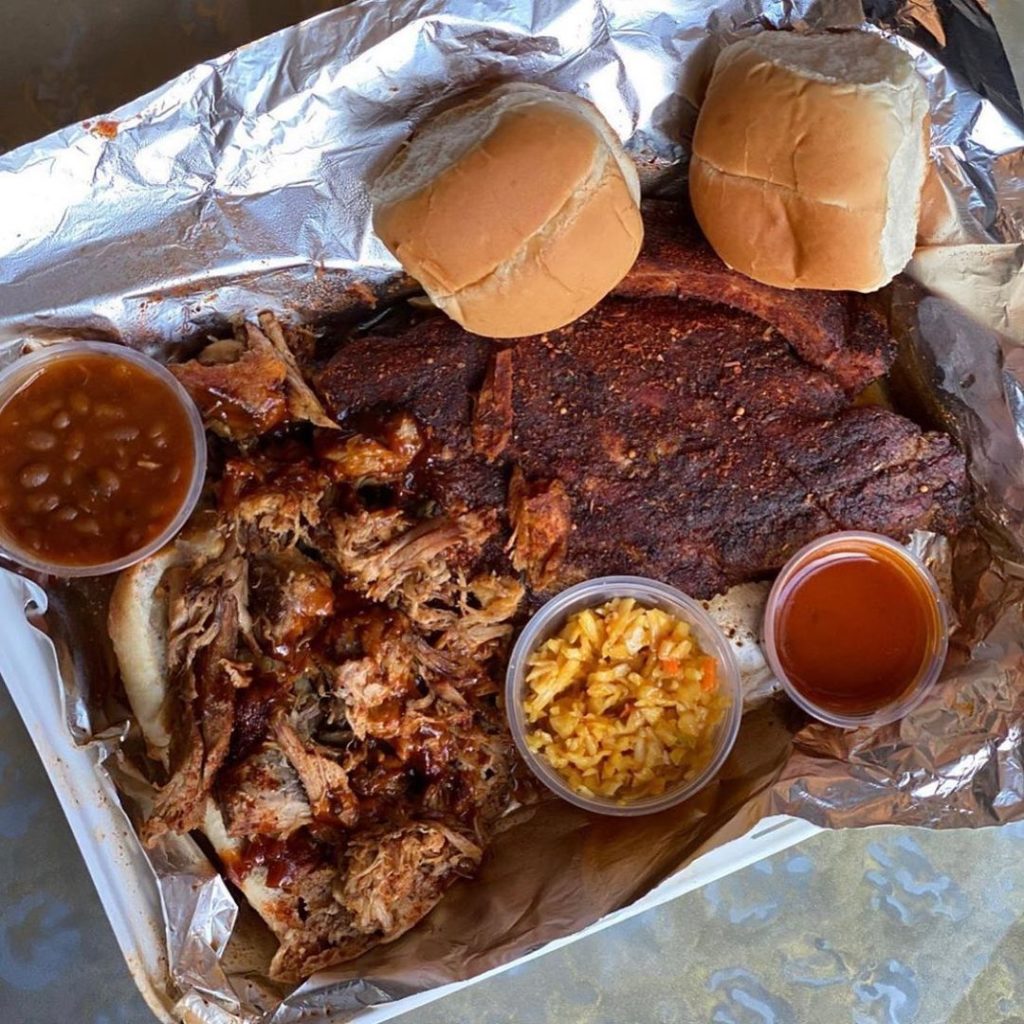 Memphis is a city that takes great pride in its barbecue. We’ll argue with anyone that we have best in the world! Every region and state “known” for their BBQ has their own way of doing things. For example, Texas is all about the brisket, The Carolina’s are big on their different sauces and the East Coast states prefer their meat sliced and tangy, STILL no one does it quite like Memphis. Barbecue is an important part of our culture here in the Bluff City. Memphis-style barbecue stands out from the rest! Here in the 901, we tend to lean more towards the pig, specifically pulled pork or a big ‘ole rack of ribs. Memphis barbecue typically uses the highest quality of meat and wood, then allows the slow smoking process to enhance the meats natural flavor. This results in pork that is tasty and tender, even without rubs and sauces. Memphis is best known for its dry rib for that reasoning.

You can’t turn a corner in Memphis without smelling that signature smoke, a smell synonymous with the best barbecue in the world. Of course, we don’t discriminate, options such as, beef, sausage, turkey and all parts of the chicken — especially wings, can be considered barbecue too.

Want to know everything about Memphis BBQ?

Thanks for signing up

Keep an eye on your inbox for our latest Memphis BBQ News.

A lot of the variation in barbecue flavors and sauce can be explained by geographical factors. Since Memphis is a port city, there

was access to a wider variety of ingredients to slab on the meat, plus molasses was an ingredient that was easily attainable because it was shipped right up the mighty Mississippi River, so that kinda became the style – lots of spice and a sweet, tomatoey based sauce.

Memphis barbecue sauce has its own distinctive flavor, as well. Though the specific ingredients will vary from cook to cook, Memphis sauce is usually made with tomatoes, vinegar, and any countless combination of spices. It is generally thin, tangy, and somewhat sweet. Memphis sauce is poured over pulled pork or served along side dry ribs.

Common sides are coleslaw, potato salad, baked beans, greens or green beans and mac and cheese. Hungry yet? Some restaurants serve a bun with your order, cornbread or a toasted sliced bread. Whether you make a sandwich or just use it to soak up some of the delicious sauce, it’s what we like to say, “Smack Yo Mama Good!”

If you are at a BBQ restaurant and are at a loss for what to order, start with the pork, and you won’t be disappointed!

Memphis is famous for BBQ, but we’ve got so much more. From spicy and savory hot wings to top tier upscale dining, there’s a culinary experience for everyone. Click here to learn more! Dig Into Food & Drink